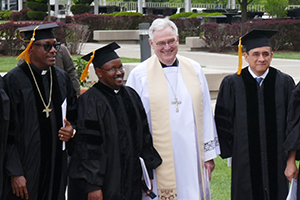 FORT WAYNE, Ind. (CTSFW)—In the two decades that Dr. Timothy C. J. Quill served at Concordia Theological Seminary (CTSFW), Fort Wayne, he has been through war zones, seen the bodies of the dead, been held up, nearly mugged, and taught the way in which to hit a person who has you by the collar. He is not the only one; CTSFW boasts a remarkably high percentage of professors who have become very experienced travelers. “They’re hardy, fearless, and ready to go out,” Dr. Quill said, who retired on June 30th. “As director of International Studies I appreciated that they were low maintenance.”

Today’s culture of missions at CTSFW can be traced back to the 90s and Dr. Quill’s first assignment with the Seminary. Professor of Pastoral Ministry and Missions at CTSFW since 1998, Dr. Quill’s history at CTSFW is, in many ways, a history of the Seminary’s international outreach itself. In 1996, two years before Dr. Quill officially joined the faculty, a man named Marvin M. Schwan put together a grant to develop a program to train Russian men as pastors, after the communist purges of the 30s nearly annihilated Lutheranism in the former Soviet Union. “He had a heart for Russia,” Dr. Quill said of Schwan. “He knew that most of the Lutherans there had been killed or sent to Gulags. We needed to rebuild the Church that had been destroyed by the Soviet Empire.”

They named it “The Russian Project” – project, not program, to make it clear that it had an end date. As to why Dr. Quill was named director of the project: “I took a trip to Kazakhstan,” Dr. Quill explained. He added, with a quiet laugh, “I was an expert because I’d been in Moscow for two days.” No one knew precisely what to do or how to do it, but because the work needed to be done, they made it happen. CTSFW put kitchens in the dorms so that the families could come, and Dr. Quill went to the embassies for advice.

The project would eventually train a total of 31 men (plus six women, taught as translators, church musicians and deaconesses), all of whom, as Dr. Quill put it, “walked out of here drinking the confessional waters.” Many of the local Fort Wayne Lutheran church members still remember the Russians, and for those students and faculty who were here from 1995 to 2005, their language became a familiar sound in the Dining Hall. “The campus was enriched by them,” Dr. Quill said. “They brought an eagerness to learning that wasn’t there in Russia. The professors and the president will tell you how much they brought. They forced the Seminary to look outwards.”

The project next focused on the development of the Lutheran Seminary in Novosibirsk, Russia, which had been dedicated in 1997, a year after the Russian Project began. Professors from CTSFW and other LCMS pastors began teaching and preaching at this Seminary. By contrast, today the Novosibirsk Seminary is entirely Russian led and taught. While professors still visit and guest-teach, the “best Lutheran Seminary in the former Soviet Union” (as Dr. Quill describes it) is now served by the students who first came to us. “They were extremely intellectually gifted students,” Dr. Quill said, pointing to a photograph he keeps in his office of the first class who came to CTSFW. “Many of these men are now bishops, leading theologians, presidents of seminaries, educators and leaders in their church bodies.”

When the Russian Project ended, the international outreach extending out from CTSFW had already become much bigger than the groundwork first laid by that grant from the Schwan family. The professors here still travel extensively, teaching intensives and bringing confessional teaching to Lutheran seminaries across the world. The missional environment has led to study abroad programs, promoting collegiality among students across nations and giving our own American sons and daughters an immediate understanding of the need for Christian humanitarian outreach and service. Some choose to enter foreign harvest fields as career missionaries, and others bring that enthusiasm for mission into their home congregations, whose support makes international missions possible.

And still international students come to the CTSFW campus. As director of International Studies, Dr. Quill’s job was to take care of these men. “There’s a sort of rhythm to it,” Dr. Quill explained. “At first they can’t believe what America is like – it’s paradise compared to some countries. But after about three to four weeks the Seminary becomes a prison because they can’t drive. Part of my job, then, was to make efforts to connect them with local churches, to connect them to a world beyond campus. And though they all clump together in the cafeteria, they also assimilate and develop lasting relationships with American students.”

Dr. Quill is adamant that neither the Russian Project nor the Seminary’s other international endeavors would have worked without the support he received from CTSFW’s leadership, from their commitment to engage with the larger international community to the financial support from the Church. Synod also has a vigorous and intentional attitude for Church relations around the world, and Dr. Quill named a few of the new opportunities off the top of his head: Ethiopia, Tanzania, Kenya and Madagascar, with vibrant seminaries in Nigeria, India, Papua New Guinea, South Africa, Hong Kong and Taiwan. 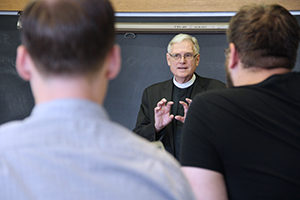 “In the last 22 years, the Seminary has become a world-recognized institute around the globe, with students who come here and professors who go out,” Dr. Quill said. “Our faculty has played a major role in introducing students and church leaders to historical confessional Lutheranism. As a result, the Lutheran identity is commonly spoken of and debated at international conferences.”

Dr. Charles A. Gieschen, academic dean, sees a much more specific person to thank. “No one at CTSFW has done more for the furthering of confessional Lutheranism in the global context over the past 22 years than Dr. Quill. He has traveled, taught and built relationships across the world. We are profoundly grateful for his service to Christ and this Seminary.”