One of the Holy Trinity Suffered for Us FORT WAYNE, IN, February 25, 2022—During a special portion of last Friday’s Daily Chapel service, the community of Concordia Theological Seminary, Fort Wayne (CTSFW) honored and celebrated a distinguished faculty member with a Festschrift: One of the Holy Trinity Suffered for Us: Essays in Honor of William Weinrich.

As Dr. Gieschen expressed, “It is a great joy for the Seminary to honor Dr. William Weinrich, a very beloved professor and colleague who has served Christ faithfully for decades at CTSFW. In addition to 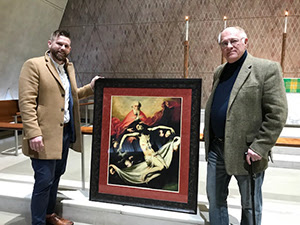 the presentation of the Festschrift to Dr. Weinrich, he was honored by two other gifts. The Seminary offers thanks for the gift of a wonderful framed print of The Holy Trinity by Jusepe de Ribera (c. 1635), donated by John Weinrich in honor of his father, and the gift of a portrait of Dr. Weinrich donated by the CTSFW Class of 1984.”

We look forward to sharing Dr. David Scaer’s article about the Festschrift in our upcoming spring issue of For the Life of the World magazine. In it, Scaer says, “Very few books come with a title with such theological depth as the recently published Festschrift for William C. Weinrich, One of the Holy Trinity Suffered for Us.” Although crucifixion was not uncommon during Jesus’ time, what made Christ’s death an exception was that “it happened within God’s own being, in which not only Jesus as the Son offered Himself as a sacrifice to God, but also, in the same act, God offered His Son as a sacrifice.” 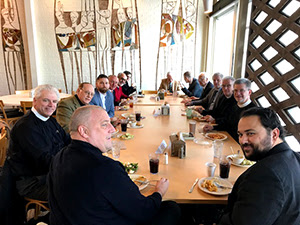 Dr. Weinrich expressed his gratitude for the honor and for the ways God has blessed him in his time at the Seminary thus far. “The Seminary community was very gracious to me. A Festschrift, including articles by colleagues and former students, reminds one of the great blessing it is to teach at such a school as CTSFW. While such a book of essays is an honor, the greater honor is to have been associated with colleagues and pastoral students for almost 46 years! It is humbling to have such fine words spoken about you. That one may have had such influence is humbling, and hopefully it is true! God has richly blessed me in allowing me to be a faculty member at CTSFW for such a long time. With his favor, perhaps more years lie yet in the future!”

Though it sold out upon its initial 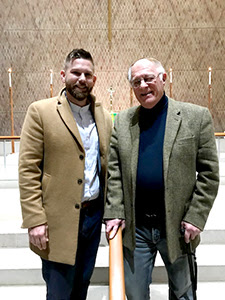 debut during this year’s Symposia, more copies of Dr. Weinrich’s Festschrift are now back in stock and available for purchase. To get your copy of One of the Holy Trinity Suffered for Us, visit our campus Bookstore in person or online at bookstore.ctsfw.edu/one-holy-trinity-suffered-us-essays-honor-william-weinrich. If you do not see it in the catalog, that means that it has sold out again and is temporarily unavailable. You can inquire about the restocking schedule at 260.452.2160.