Johann Gerhard (1582–1637) and the Conceptualization of Theologia at the Threshold of the “Age of Orthodoxy:” The Making of a Theologian 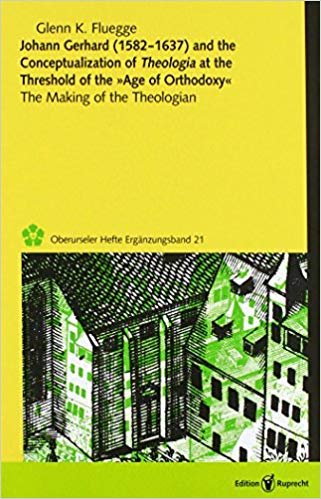 The Lutheran concept of theology as a “practical habit” has been extremely important from the age of Lutheran Orthodoxy up to the present. In Johann Gerhard (1582–1637) and the Conceptualization of Theologia at the Threshold of the “Age of Orthodoxy,” Glenn Fluegge of Concordia University, Irvine, explores the origins of this understanding of theology within Lutheranism. The book represents a modified version of his doctoral dissertation.

As with much of the methodology of scholastic orthodoxy, the notion of theology as a “practical habit” draws on Aristotelian philosophy. In Aristotle’s thought, a habitus (habit) is an aptitude for action possessed by a human being. This aptitude can have moral and epistemological dimensions. One must have a certain aptitude to develop virtue through right practice (i.e., the basis of Aristotle’s virtue ethics). One also needs an intellectual aptitude to engage in a course of study on an academic subject.

The medieval church used Aristotle’s concept of habits as a way of conceptualizing how human beings exercised faith, hope, and love. God’s grace was understood as creating faith, hope, and love in the soul as capacities that developed by correct behavior. Luther rejected this notion not only because it lacked biblical support, but because “habitus” quite literally means “to have” or “to possess.” In Luther’s conception of the life of faith, grace can never be seen as a possession. As the Reformer famously wrote at the end of his life, we are “beggars all.” Nevertheless, Luther’s, and later Lutheran, rejection of the notion of faith as a kind of habit created difficulties for discussion of theology as a discipline.

Gerhard’s impetus to further develop the concept of theology as a “practical habit” was occasioned by the fallout from the “Hofmann Controversy.” The Helmstedt professor Daniel Hofmann insisted that everything taught by philosophy was the wisdom of the flesh and therefore opposed to theology. Jakob Martini of Wittenberg affirmed that theology and philosophy were harmonious and should be seen as simply different modes of the same divine truth. This debate spilled over into an argument about the nature of theology as a discipline. Hofmann insisted that theology grew out of the piety of the individual theologian. If this were not the case, and theology was primarily academic discipline, it could be engaged in by anyone with basic intellectual capacities. By implication, unbelievers could be just as good theologians as people with genuine faith. Hofmann found this conclusion to be unacceptable. Countering this, Martini and others insisted that theology was a real form of propositional knowledge about God. Thus, it was a genuine academic discipline that utilized the same intellectual tools as other disciplines. Many Lutherans drew the conclusion during this debate that the practice of doing theology presupposed the existence of a certain intellectual aptitude (habit).

Gerhard wanted to affirm that theology was a genuine academic discipline, while not cutting theology off from faith and piety. Moreover, he wanted to affirm that the goal of theology is essentially practical (i.e., engaging in word and sacrament ministry). Hence, he developed the concept of theology as a “practical habit.” Following Aristotelian concepts of cognition, Gerhard asserted that there was a passive and active intellect. When a human being perceives an object of cognition, the passive intellect filters out all the accidental qualities and the active intellect identifies its formal reality. Nevertheless, when one reads Scripture the primary objects of perception (i.e., the doctrines of the faith) are not part of the natural order and therefore cannot be comprehended by the active intellect when left to its own powers. Rather, God must illuminate the human mind and give a “habit” to identify the supernatural object of cognition, namely, the truths of the faith.

At certain points, Fluegge seems to suggest that Gerhard was nervous about making grace a kind of possession for reasons similar to Luther’s. Hence Gerhard describes the habitus of theology as not being an intellectual capacity in the normal sense. The practice of theology is a kind of intellectual event that occurred when the Word of God was read, heard, or contemplated. Gerhard envisioned this encounter with the Word of God as occurring through Luther’s threefold practice of prayer, meditation, and suffering/temptation. As Fluegge shows, the value of this theory is that it was able to incorporate both the faith and academic dimensions of the practice of theology.

Overall, Fluegge does an excellent job describing and analyzing Gerhard’s work. Some of the terminology might be a little challenging for those without a background in the period. Nonetheless, for those more advanced students of scholastic orthodoxy, Fluegge’s work is essential and is therefore highly recommended.