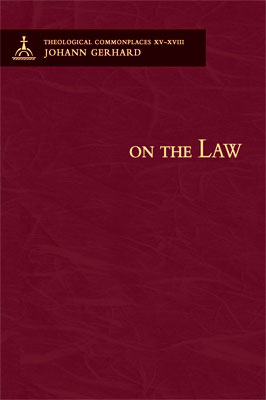 In a contemporary setting in which the very meaning of “law” varies widely, even among theologians, whether as the natural law, the eternal divine law, God’s condemning legislation, works of love, or even human edicts, this new publication in English of Gerhard’s commonplaces on the law takes a confident place in traditional Lutheranism. For Gerhard, the law, biblically speaking, is simply the statements of what ought to be done and what ought to be avoided, according to the divine will. The law falls into three familiar categories: moral, ceremonial, and civil or “forensic.”

This threefold division—at least of the Mosaic law itself—has been criticized in recent years with the counter-position that ancient Israel made no such distinction, but understood the covenantal character of the Mosaic law, such that everything communicated by the Lord via Moses was integral to the covenant. Not merely the decrees, but the whole narrative of the Pentateuch is a constituting document of the old covenant. Along these lines, interesting contemporary research challenges the general assumption that the term “law” (nomos/torah) in the Bible usually refers to principles or decrees in favor of a definition of law as “covenant narrative” or the like. These discussions in turn are significant in that they raise the question of the relation of the Mosaic law to the Christian. Does the Mosaic law only accuse? Is obedience to it expected? Or does the law have a broader role as both accusation and typological prophecy? Is it a kind of wisdom literature which assumes meditation, inward delight, and prudential, expansive application to life? For an excellent, recent contribution in this area, see Brian S. Rosner, Paul and the Law: Keeping the Commandments of God (Downers Grove, IL: IVP, 2013).

For his part, Gerhard engages the law as morally accusing and instructive, but also as typological of Christ and the gospel. The primary purpose of the ceremonial law is to look forward to the coming Christ, and his sections treating the ceremonial law present passages in some detail according to this view. Some sections are quite long and even somewhat repetitive, although in some cases this length is due to numerous biblical quotations. Sometimes it would have been appreciated if Gerhard had not just strung quotations together, but had developed his explanation of these passages in interesting ways with reference to the passages presented for consideration.

Regarding the moral law, Gerhard structures his treatment in line with the Ten Commandments. This treatment of the moral law is especially interesting in the way that he explains the meaning of the commandments far beyond the brief summaries in the Small Catechism. One example is his treatment of the Third Commandment. Not only is assembling for the Divine Service required by this commandment, but avoiding activities which would distract or undermine the use and meditation on the word of God. Rest for servants—employees and workers of all kinds—is required to be offered. Gerhard also elaborated on the benefits of prayer and meditation. In Gerhard’s treatment of all the Ten Commandments we see that their broad scope finds concrete exercise in numerous and various practices to be pursued and vices to be avoided. Reflection on Gerhard’s guidance, whether the reader agrees or disagrees, will deepen his understanding and practice of love for God and neighbor.

The volume is published in a sturdy hardcover binding that will endure through many years (although the gold-colored foil stamp of my copy has started to wear after several months of moderate use). The book will be of great value to theologians, historians, pastors, and interested lay people.