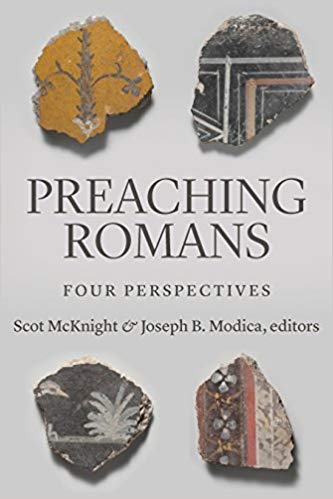 The preacher who uses the three year series will have ample opportunity to preach from Romans during Series A. It is during the Series A cycle that Romans occurs the most frequently in the pericopes. Those who use the one year series will still find opportunities. Whether the preacher chooses to preach occasionally on the readings from Romans, or to formulate a sermon series on the book, there will be a desire to have a deeper understanding of the letter.

The Lutheran preacher will obviously be familiar and quite comfortable with approaching Romans from the “Reformational Perspective.” The “Reformational Perspective” recognizes how Paul so clearly presents the Doctrine of Justification by Grace through Faith in his letter. This is the core of Romans. This is the core of the Christian faith and the goal of the preacher is to proclaim clearly forensic justification.

The other approaches to the letter of Romans do not see objective justification as the center of Paul’s letter, at least not in the same way as the “Reformational Approach.” Even the understanding of justification is, to some extent, different. The Lutheran preacher will find much with which to disagree in these approaches. The “New Perspective” for example relies on a reconstruction of Judaism that concludes that Judaism was not a religion of works righteousness and therefore was not fundamentally different from Christianity. The “Participationist Perspective” argues that we should not separate justification from sanctification. The Lutheran, after reading Michael Gorman’s explanation of this view, will counter that we should not confuse them either.

Having presented the different views of Romans, the book presents sermons that are preached from each perspective. This allows the preacher to see how these different approaches might look when preached. The first half of the book does an excellent job of summarizing the different preaching approaches to Romans. Those who are looking for an introduction to the various approaches to Romans will find this to be an excellent resource. The “Reformational” preacher, however, who is looking for new ways to present the timeless message of salvation by grace through faith, the goal of the apostle in this letter, will not find as much value.