The Surprise of Reconciliation in the Catholic Tradition

The Surprise of Reconciliation in the Catholic Tradition 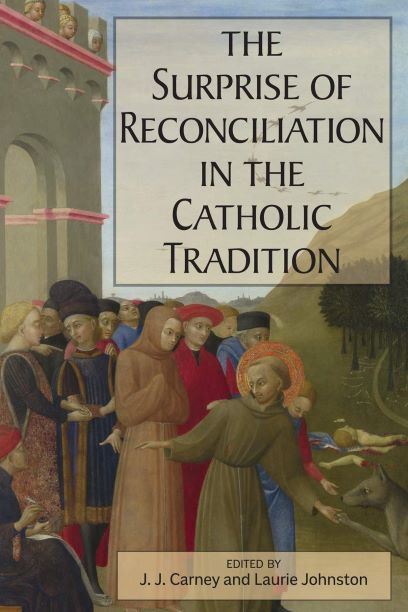 Social reconciliation has become a focus of modern Roman Catholic theology, especially with the pontificates of John Paul II, Benedict XVI, and now Francis. This is part of the “horizontal” aspect of reconciliation that begins with the vertical—the reconciliation of the world to God in the death and resurrection of Jesus Christ—and then extends not only to the neighbor as an individual, but to communities, societies, and even the world. Hence, a “social” reconciliation. This has been evidenced in recent years with the formal, public apologies and the beseeching of forgiveness for past wrongs and injustices by popes and other church leaders, and also more recently by governmental and political leaders, with the hopes not only of justice, but of reconciliation.

J. J. Carney and Laurie Johnston seek to anchor this modern-day, post–Vatican II movement within the history and tradition of the Roman Catholic Church, to provide a ressourcement to show that while social reconciliation is a modern-day emphasis in the church, it has also been part of the church’s work in the past, and with the further goal to help renew and extend this movement strongly, historically, and theologically in the modern day. Accordingly, the book, an anthology of essays from a variety of scholars, is divided into three sections: New Testament and Patristic Cases, Medieval and Early Modern Cases, and Modern and Contemporary Cases.

Carney and Johnston achieve mixed results. While application to modern-day social reconciliation theory can be made from the essays in the first two sections, these essays often fail to make the case that social reconciliation—as it is thought of and practiced today—was really the goal in those days. The application seems forced or left for future development. Perhaps a limitation of space for each essay is the reason, but one wishes a more convincing argument was made. Further, Lutheran ears will easily (and not surprisingly) perceive a confusion of the two kingdoms throughout. The final section, dealing with our modern times, provides examples of individuals and groups who have helped promote social reconciliation in very difficult circumstances, including an essay on the LWF–Roman Catholic dialogue and how reconciliation is being achieved there.

Overall, this book gives a glimpse into the modern-day Roman theology of social reconciliation and is helpful for Lutheran pastors to understand this movement and its various expressions in our world today. It is an easy read, well written, and a good reminder of the oft neglected horizontal aspect of reconciliation. Read through the Lutheran lenses of the two kingdoms and the Christian’s vocation in the world, this book can provide beneficial insights for the pastor, his preaching, and his pastoral care, in leading his people to be reconciled both to God and to one another. For the Lutheran pastor on a budget, though, spend an afternoon or two with a library copy.