The Word Does Everything: Key Concepts of Luther on Testamen...

The Word Does Everything: Key Concepts of Luther on Testament, Scripture, Vocation, Cross, and Worm. Also on Method and on Catholicism: Collection of Essays

Reviewed by John A. Maxfield, Concordia University of Edmonton, Alberta, Canada on 04/16/2018 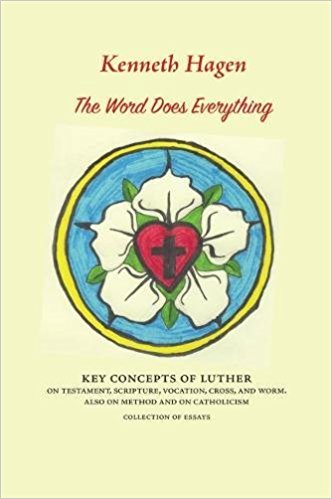 Kenneth Hagen (1936–2014) was a prolific scholar of Luther’s thought who combined vigorous study of Luther’s writings and other primary texts in their orig­inal languages with clear analysis (frequently very critical of modern scholarship and its assumptions) and a creative as well as idiosyncratic style of writing. As a doctoral student of Heiko Oberman’s at Harvard Divinity his scholarship was deeply shaped by Oberman’s approach to Luther and the Reformation through the lens of the late Middle Ages and the intellectual heritage going back to the church fathers that shaped this culture. As its long title indicates, the book being reviewed is a collection of Hagen’s essays (originally published between 1969 and 2010) on a wide range of topics. These essays focus especially on Luther’s practice of exposition (not interpretation!) of Scripture as that Word of God proclaims the Law and Gospel,
in his vocation as an Augustinian friar (not monk!), professor of theology, pastor, and reformer. Hagen planned the volume several years before his death and penned its preface in 2010.

One of the purposes of publishing a collection of essays by a notable scholar is to display both the range of interests and the coherence as well as developments in a scholar’s life work. The volume succeeds admirably in this goal, bringing together twenty-four of Hagen’s essays; many of these are easily accessible online through the ATLA database, but several that appeared originally as book chapters or published conference proceedings (such as the Pieper Lectures and the annual Congress on the Lutheran Confessions sponsored by Luther Academy) are more difficult to find. Some of Hagen’s most important and intriguing discoveries such as the importance of Luther’s monastic experience (theology as the “sacred page”) are nicely laid before the reader in several distinct forms in this collection. One of the idiosyncrasies of Hagen’s writing is frequent (sometimes tedious) repetition of key concepts and vocabulary, however, and this is somewhat magnified by the bringing together into one volume of so many essays authored for very different contexts.

Hagen spent most of his career at Marquette University, an institution founded by the Jesuits and still deeply shaped by Jesuit culture. He served his university and the academy generally very much as a confessional Lutheran who engaged critically the liberal culture of his academic training and professional context. Several of his essays, in particular one commemorating the career and theology of Dr. Robert Preus, another subtitled “What I observed about the Catholic Church while teaching with the Jesuits for 33 years at Marquette University,” and a third entitled “The Decline of Christianity in Europe,” reveal Hagen’s lively and appreciative if also incisive engagement with the religious (and not religious) cultures of his contempo­raries.

The essays are arranged topically and it is helpful (even necessary) before reading to identify the original date and context of publication from the bibliog­raphic information provided in the front matter.