Debating the Sacraments: Print and Authority in the Early Re...

Debating the Sacraments: Print and Authority in the Early Reformation 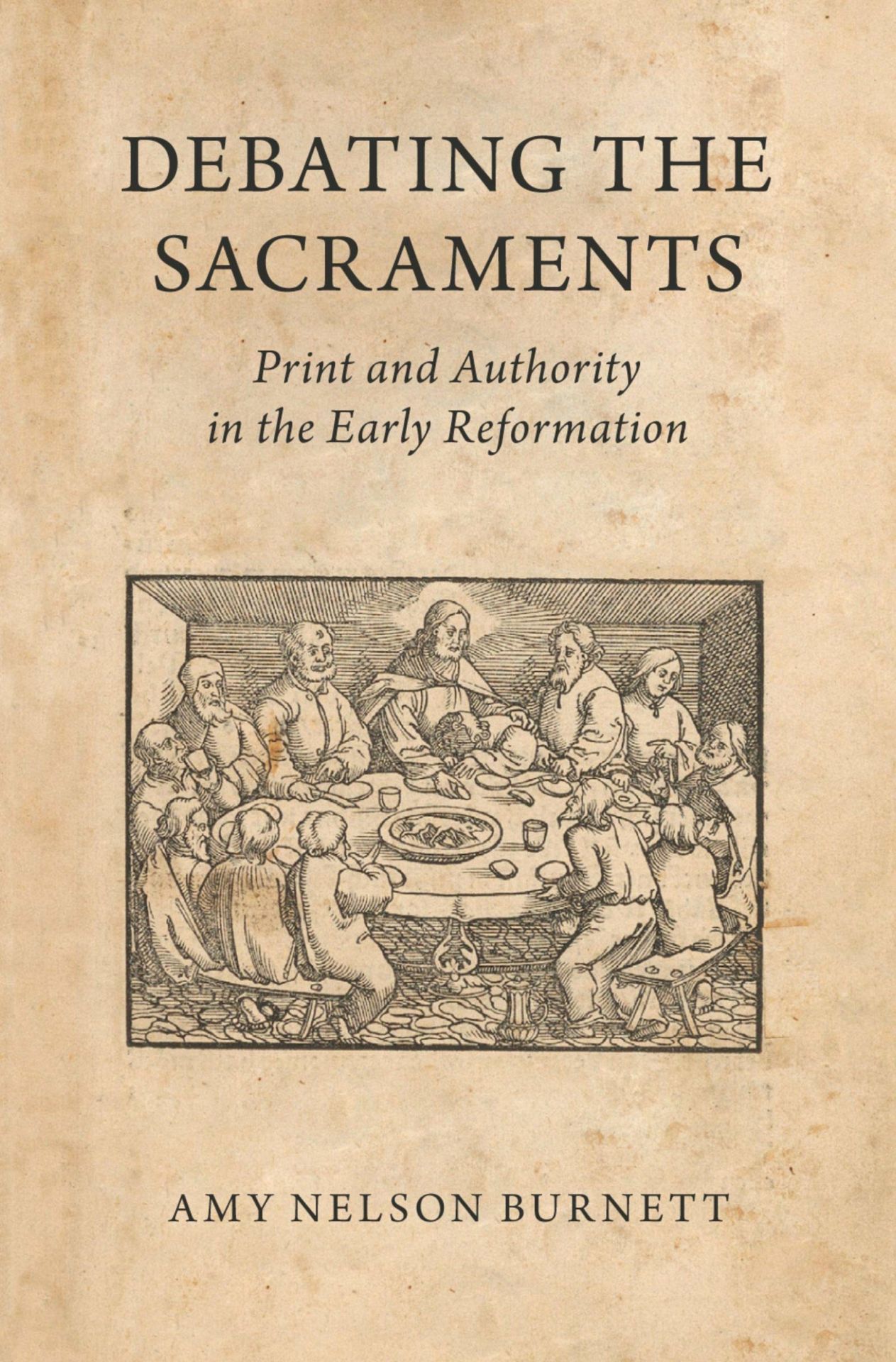 Three generations of Missouri Synod pastors and theologians have been shaped in their understanding of the Reformation controversy over the Lord’s Supper by the now-classic study This Is My Body: Luther’s Contention for the Real Presence in the Sacrament of the Altar, authored by Erlangen theologian and church historian Hermann Sasse. As indicated in the book’s preface, written in South Australia in August 1958, Sasse brought together over twenty years of research interrupted by the terrors of the Second World War to address an English-speaking audience—Sasse specifically mentions the United States, Canada, South Africa, and Australia, where the Church of the Augsburg Confession “still confesses, with heart and mouth . . . the faith of the fathers, not because it is our fathers’ faith, but because it is the faith of the New Testament.” In this book Sasse passionately communicated his devotion to preserving Luther’s doctrine of the Lord’s Supper in a time when, especially in Germany, that doctrine was being sacrificed on the altar of modern ecumenism and confused by developments in the modern liturgical movement. As its subtitle indicates, the goal of the book was to present Luther’s vigorously-fought view; he carries out this goal through sections on the medieval background, Luther’s early development of his doctrine of the Lord’s Supper, and the Swiss reformer Huldrych Zwingli’s understanding, before analyzing the Great Controversy on the Sacrament, the Marburg Colloquy and its aftermath, and finally the Sacrament of the Altar in modern Lutheranism. The book thus mirrored, from a Lutheran conviction, the important analysis of the controversy by the Zurich/Heidelberg historian Walther Koehler, published in two volumes in 1924 and 1953 (reissued in a single volume in 2017), titled (translated) Zwingli and Luther: Their Struggle over the Lord’s Supper in Its Political and Religious Connections.

Both studies—Koehler’s and Sasse’s—were careful and “objective” historical analyses, yet their apologetic purpose was clear throughout: each was a defense of either Zwingli’s or Luther’s position in the great controversy over the Lord’s Supper. Both studies focused on Zwingli and Luther and gave considerable space to their personal confrontation at the Marburg Colloquy. (Sasse’s book devotes 52 pages to the controversy of 1524–1528, but nearly 90 pages to the Colloquy and its immediate result, and another 50 pages to its aftermath, while Koehler used the Colloquy as the pivot connecting his two volumes, and also published a reconstruction of the Colloquy in 1929.)

I provide description of these older studies because Amy Nelson Burnett’s book Debating the Sacraments: Print and Authority in the Early Reformation takes analysis of the sacramentarian controversy of the 1520s to a new level in a book that deserves a place next to Sasse’s classic study in the formation of future generations of Lutheran pastors and theologians. Burnett’s book originates from a very different context: rather than a church historian trained in the German tradition, Burnett is a cultural historian of senior rank at a major American university (professor of history at the University of Nebraska–Lincoln). Although she certainly knows her Reformation theology, her doctoral education was likewise pursued in history at a secular American university rather than with a theological faculty; she and her husband Stephen, likewise a historian at the same University, are not “trained theologians” or clergy, but lay members of a Missouri Synod congregation in Lincoln.

Burnett’s goals in her book are also different from those of Koehler and Sasse. She analyzes the controversy over the sacraments (emphasizing, importantly, that it was also a controversy over the meaning and practice of Baptism), not as a defense of either side but to understand the crucial role the controversy played in the early Reformation. Burnett argues that the controversy exposed a “crisis of authority” among evangelical reformers, as both sides had repudiated the hierarchy of authorities that had governed the papal church for a millennium (or at least for over 700 years, since Carolingian times), and so would appeal finally to Scripture alone (as the highest authority) to define both Christian doctrine and heresy. (For the Sacramentarians, the Lutheran view of the substantial presence of Christ’s body in the elements amounted both to Docetism—that is, Christ’s body lacks the character of a true body, which must be located in a place—and to idolatry.) The controversy was thus played out not in councils or colloquies but through “print”—the term in the subtitle and throughout the book is Burnett’s shorthand for the array of shorter pamphlets, extensive treatises, and expository commentaries on the Bible that were the media of the controversy from all sides. Finally, reference to “all sides” is critical in Burnett’s analysis. Koehler’s study (and following him, Sasse’s) is quite distorting of the character of the controversy through its focus almost exclusively on Zwingli and Luther. Burnett focuses on all the figures who contributed shorter or longer pieces, in fewer or greater numbers of publications and editions, in this great controversy that was carried out in print and was already “settled” as unresolved and unresolvable by the time Luther and his supporters faced the Swiss and the Strassburgers at the finally fruitless Marburg Colloquy in October 1529.

Astoundingly, Burnett’s study incorporates both analytical and quantitative analyses of 372 titles, in 905 printings published between 1525 and 1529, that contributed to the debate on the Lord’s Supper. By focusing on the numerous authors who contributed to the controversy, and also analyzing the question about who was responding to whom in which publication, Burnett convincingly demonstrates that not only did Luther, as Sasse noted, delay his own response to the Swiss (whose central figure was arguably Oecolampadius and not Zwingli) while several other figures—especially Johannes Bugenhagen and Johannes Brenz—argued on behalf of the Lutheran doctrine, but also that the two “suns” (as Koehler described them) around which the many lesser actors in the controversy revolved were not Luther and Zwingli but Luther and . . . Erasmus! Yes, the many and varied explanations for why “This is my body” could not mean that Christ’s true body was eaten in (or “with” or “under”) the bread of the Lord’s Supper can all be traced to the Platonic dualism (spirit vs. flesh) of Erasmus of Rotterdam. This despite the fact that the conservative humanist-reformer never repudiated the papal doctrine of the Mass, and had begun to withdraw personal support for Luther already in October 1520 after recognizing the radical character (and thus the fatefully divisive and destructive nature) of Luther’s critique of the papal sacramental system in his treatise On the Babylonian Captivity of the Church.

It may be too much to expect Lutheran seminarians, theologians, and pastors to master the details of this careful analysis carried out in 314 pages of text (plus another 120 pages of Endnotes followed by bibliographies—30 pages of the sixteenth-century imprints plus another 27 pages of modern editions and secondary literature). However, it is absolutely necessary for Lutherans today to understand the character of this controversy that caused the Reformation to become not one but two major traditions—Lutheran and Reformed—that have so deeply shaped modern culture, both in the church and in society. One cannot understand the Lutheran Confessions, or even the Lutheran confession of the gospel, without understanding the Reformation, and Burnett makes a clear case for understanding the central issue of the Reformation as its controversy over the sacraments (both of them!) and its crisis of authority in the attempt to settle controversies among Evangelicals.

Lutheran theologians and churchmen are mistaken when they view the original Lutheran reform of the sacraments (and the liturgies of the sacraments) as “conservative,” and appeal variously to the early church fathers, to dogmatic and liturgical history, to a “eucharistic interpretation of John 6,” or to traditions celebrating the Lord’s Supper as a Eucharist—all in an effort to re-form ways of speaking about and celebrating the Lord’s Supper in Lutheran congregations today. All these arguments were used by Luther’s sacramentarian opponents in the controversy of 1524–1529 over-against Christ’s institution of the Lord’s Supper. Luther defined the meaning and practice of the Lord’s Supper by the words of Christ’s institution, not only at Marburg (where he chalked the words Hoc est corpus meum on the conference table), but throughout the controversy, ever since it erupted from Andreas Karlstadt’s attacks on Luther’s theology and personal authority as a reformer. Luther viewed the words of institution as words of command and promise (just as with Baptism), through which Christ gives pure gift: communion with the very body and blood that he gave once and for all on the cross as atoning sacrifice for the sins of the world, in which communion he promises (and promise requires faith) the forgiveness of sins, life, and salvation.