Time and the Word: Figural Reading of the Christian Scriptures

Time and the Word: Figural Reading of the Christian Scriptures 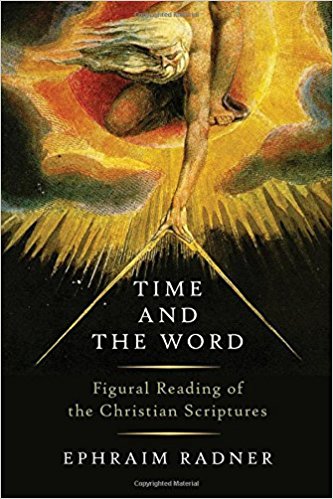 This is a book about divine providence and the Christian life formed under the word of God. The image on the cover—The Ancient of Days by William Blake—beautifully illustrates what Radner does with his words: setting all things within the hand of God. It is a book about history and hermeneutics, and how the Lord draws us into himself through the text of Scripture as his own, creative and redemptive voice.

It is not an easy book, though. Radner’s grasp of philosophy—both ancient and modern—can easily overwhelm. At his fingertips are just as easily the Anglican Divines, medieval Rabbinic interpretation, and modern Pentecostalism. He goes in depth with Wycliffe and Bernard of Clairvaux, Origen and Augustine, even showing his familiarity with Lutherans Matthias Flacius Illyricus, Salomon Glassius, and Johann Gerhard (75–76). The intellectual breadth of this work is vast, and its critical depth is incredibly careful. Radner, a well-loved professor of theology at Wycliffe College in the University of Toronto, is a true renaissance scholar, recognizing that life does not exist in clearly defined and easily separated categories—and neither does Scripture.

Challenging though it is, this book is for the church, particularly her theologians and preachers. For all its technical, philosophical, and historical detail, his goal is “to locate figural reading as a kind of common sense, if disruptive, Christian practice” (113). Though heavily theoretical on the front end, the second half grounds all that he writes in the delivery of the Word to the hearer within the context of the preaching task. Ultimately, it is as a preacher that he writes, and it is with a mind toward his experience within the African mission field that he brings his task to bear on the everyday Christian layman.

Because it is about preaching and hearing the word, Radner outlines the contours of what he calls a “figural reading,” which is distinguished—but not cleanly (and intentionally so)—from a “figurative” reading. Figural pertains to the stuff—people, events, narrative—while figurative has a purely semantic focus. Figural reading receives the “everything” of God’s act in creation, which he clearly identifies as Christ the Word (7). The “allness” (210) to which he refers comes from Exodus 20:10, “And God spoke all these words.” It presumes a unity of the Scriptural, two-Testament witness, the inspiration of the Holy Spirit, and the self-disclosure of God’s action upon humanity for the sake of drawing man into the life of God—“into the text where God’s word, in all his creative omnipotence, does its work of self-giving and conformation” (263). He lays out not so much a method, as a discussion of the character and nature of Scripture—“an uncovering, and ‘being confronted,’ and then taken in” (275)—and the chronological complexity encountered while attempting to describe the historical meaning of the text.

Radner addresses this notion of meaning at length, distinguishing a figural approach from modern historicism, which is built around two governing questions: 1) what is the authorial intent of the writer?; and 2) did it actually happen? Radner contends for a “realm, rather than a single locus, that is the reader’s destination; a place to move around, not a place to stand still, insofar as the text’s meanings find their contours in relation to the breadth of Scripture and its reach over the entirety of the world” (267). He has no use for a sort of post-modern plurality of meaning, based upon subjective whims, or reader-response. Rather, “to read and to preach figurally, is to read and preach as the creature of the God whose Scripture orders and tends the world” (263). And that ordering and tending is always toward Christ, what Radner refers to as the Christian attitude of ascesis (58).

Figural reading, he argues, was simply the natural reading up until the sixteenth century (though he shows how it continues beyond that as well). It is a reading that draws from the whole canon of Scripture, pooling verses together based on the logical and syntactic connections, natural to the notion of Scriptura Scripturae interpres (213–214). The underlining assertion is that God speaks through his word.

Though taking a few shots at traditional, seventeenth century scriptural loci—such as efficacy, sufficiency, perfection, perspicuity, and clarity, citing both Heinrich Schmid and Johann Quenstedt (278)—Radner’s goal is to enlarge our reception of Scripture. The above loci, he argues, derive from a consideration of Scripture as an object, rather than a subject, a passive tool to be used, rather than an agent that does what it says. What it says and does, Radner argues, is “essentially Christological. It will always show Christ, express Christ, reflect Christ, or lead to Christ” (280). This because “somehow” the Word and the words are “the same.”

The book concludes with an appendix of four figural sermons: Aelfric of Eynsham on Palm Sunday (tenth century), John Donne’s Sermon XIII on John 8:15, “I judge no man” (seventeenth century), John Jasper on Exodus 15:3, “The Lord is a man of war” (nineteenth century), and one by Radner himself on the Good Samaritan. With slight biographical changes to the introduction, Radner’s sermon might just as well be preached by one of us.

This book is highly recommended as one of the best recent contributions to the character of Scripture and how we might best engage the word through preaching and hearing, receiving and being formed thereby.